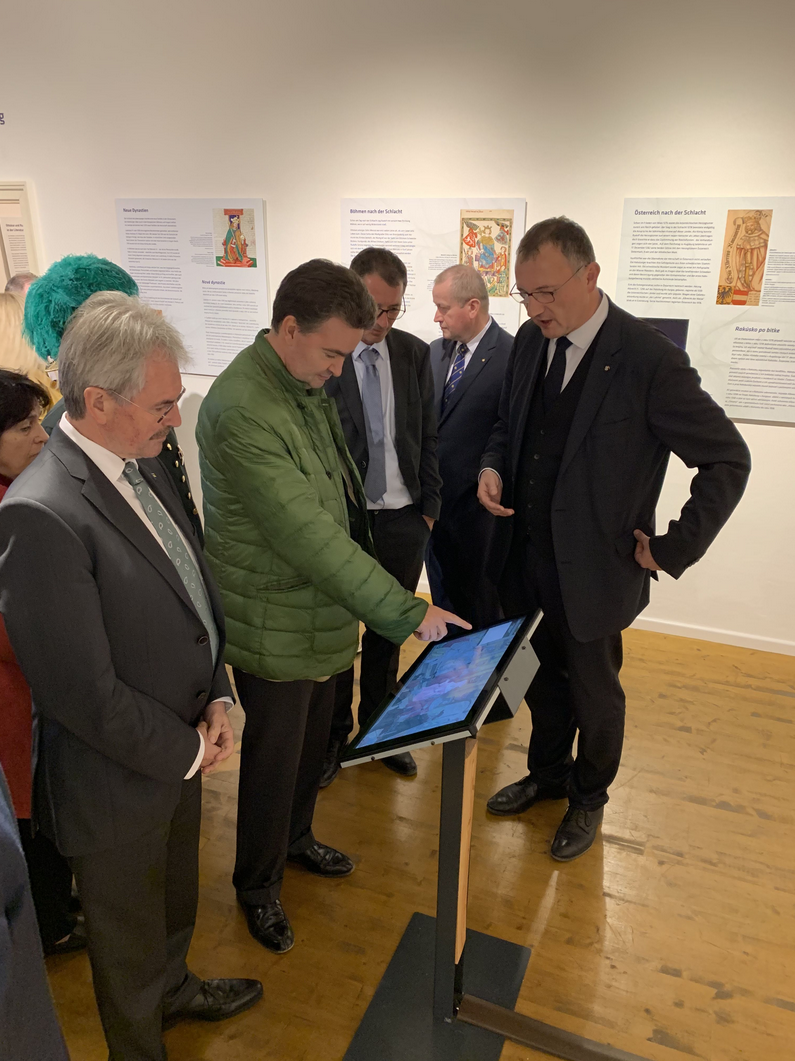 “Whenever a Habsburg is in Jedenspeigen, something decisive happens in Austria.” With these words the President of the Lower Austrian Parliament, Karl Wilfing, closed his opening speech in the courtyard of Jedenspeigen Castle. Although he referred to the daily political events of 18 May, he touched upon a broader spectrum back to the year 1278. On 26 August, the largest knightly battle of the 13th century took place within sight of the castle. The Bohemian King Ottokar Przemyls fought against King Rudolf of Habsburg for power in Austria. With the help of his Hungarian allies, Rudolf won the victory, the House of Habsburg settled on the Danube and a new era in the history of Central Europe began.

Archduke George had come as a representative of the House of Habsburg. In his speech he emphasized the importance of the events of 1278 for the family, especially the clever policies of the victor Rudolf von Habsburg. After the battle, Rudolf von Habsburg decided on reconciliation and married his daughter Guta to the son and heir of the Bohemian king, who died in Jedenspeigen.

Central Europe was the main theme of the opening speeches, which were simultaneously translated into Slovak. The renovation and redesign of Jedenspeigen Castle had only been possible through an INTERREG project with municipalities in western Slovakia. Together with the Small Carpathian Museum in Pezinok, a special exhibition dedicated to the wine cellar architecture of Central Europe was prepared.

The exhibition “Schlacht und Schicksal” (“Battle and Fate”) was curated by friar of the Order Günter Fuhrmann. In his presentation he pointed out both the Central European orientation of the exhibition and the use of modern media developed by his company Cantat Heritage & Innovation. The busts of the kings begin to entertain themselves by projection; in a multimedia room, the battle can be experienced on a U-shaped, two-metre-high and ten-metre-long screen in a five-minute installation.

The Order of St. George was prominently represented at this opening, led by our deputy Grand Master Archduke Georg and procurator Baron Vinzenz von Stimpfl-Abele. Commander Bernhard Wagner and Vice Commander Franz Aigner came with a strong delegation of the Commandery Heldenberg. The Commandery Hofburg was present with Commander Joachim Zimmel, the Commandery Czech Republic with Vice Commander Hubert Fischl.

This Saturday also saw the opening of the new “Schlossvinothek”. Jedenspeigen has been famous for a very special wine for many years, a “Habsburg wine” is pressed on the vineyards that grow on the historic battlefield. Werner Zirnsack, chairman of the winegrowing association, described this wine “as having the same characteristics as the House of Habsburg: longevity and strength”. Archduke Georg also referred to this in his speech: Never before had his family been “depicted in a bottle of wine”.